In researching for this post, I found that Evan Lewis over at Davy Crockett’s Almanack had recently covered this book and I had somehow managed to miss it. My bad.

Evan covers things nicely relating to the history of this particular book. I will add the copyright on my copy is 1925 and the dust jacket is in pretty good shape. At the bottom of the inside flap of the front of the jacket are the disclaimer:

The issuance of the COMPLETE AND UNABRIDGED NEW EDITION at a reduced price is made possible by (a)use of the same plates made for the original edition; (b)acceptance by the author of a reduced royalty.

Hashknife Hartley and Sleepy Stevens are headed to the small town of Pinnacle where Hashknife hopes to cure his rheumatism in the hot springs. The stage they are riding(late at night because of he heat) ia held up, a box taken, and one passenger, a young fellow, is shot down while his hands are in the air.

The young man survives, Hashknife gets his treatment, and our cowboys/detectives find themselves ina plot I’ve never seen in a western before: illegal drugs.

How they work things out and get to the bottom of it is where the fun comes in.

For more forgotten books, drop in to PATTINASE every Friday.

A couple of Fridays ago, I did a post on Patti Abbot’s Forgotten Books for a Hashknife Hartley and Sleepy Stevens novel. Today, I’m posting on a couple of radio episodes of our range detective cowboys. They originally ran on Sagebrush Theater for the Armed Forces Radio Network in 1950 and had the cachet of a bit of narration by W. C. Tuttle himself. They way they are presented everywhere I look, these were the only two Hashknife and Sleepy stories to make radio. Frank Martin played Hashknife and Barton Yarborough played Sleepy. I couldn’t find out anything else about the rest of the cast(I probably wasn’t looking in the right place), but I believe I recognized one voice in the DOUBLE CROSS episode. Unless I’m completely goofy(not outside the realm of possibility), James Best played the young man accused of murder. Best is probably best known for his role as Sheriff Roscoe P. Coltrane on The Dukes of Hazzard, but I remember him more for his two spots on The Andy Griffith Show as Jim Lindsey, guitar player extraordinaire.

In DOUBLE CROSS, Hashknife and Sleepy ride into town just in time for the murder of a rich rancher. They learn he had just broke up the wedding of his daughter and a “$20 dollar a month and found” cowboy. The cowboy had threatened the rancher’s life as he stormed out.

It’s up to our two heroes, well actually just Hashknife as Sleepy seems there for comedy relief as much as anything, to figure out what’s going on and prove the young man innocent of the murder.

RANGE WAR has that old plot of two ranches wanting control of a range.

Hashknife and Sleepy ride up to find a young fellow working on a cabin on a nice piece of range land. They stop to talk, learning he’s just recently filed on the land, has a small herd of a hundred cattle, and is planning to send for his wife as soon as the cabin is finished.

About that time, the rich rancher rides up and demands he get off his land. He admits he’d always planned to file on it, having used it for grazing land for ten years, but had never got around to it. That sets the stage for the coming tussle.

Someone decides to play the two men against each other, stealing half the smaller man’s herd one night and the same amount, fifty head, of the big man’s the next. We learn early on who the culprits are and it’s up to Hashknife and Sleepy to again figure it out before blood is spilled and things really get out of hand.

These two episodes are available HERE for a reasonable price(which is what I did). It works in MP3 players and your computer, but won’t play in standard CD players. You can also listen to the two episodes HERE.(which I also did).

They were a lot of fun listening to these. I paid for them, but OTR has sent me discs in the past. I have one(of five) from the Gunsmoke radio program and the two disc set of Philip Marlowe(a particular favorite). 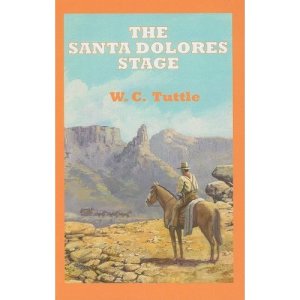 When I started reading THE SANTA DOLORES STAGE for this forgotten books post, I had no idea James Reasoner had already covered one of the Hashknife Hartley novels. Somehow I completely missed it, or forgot it and he explains the character so much better than I could. So I urge you to read this and get the flavor of the character.

There’s about fifty pages of set-up before Hashknife and his partner, Sleepy Stevens, enter the picture. James observed the same thing in his review, which makes me wonder if that was standard in Tuttle’s books.

It opens with three men fleeing a posse after hitting a stage for two hundred pounds of gold. One had been hit bad and was dying. They managed to temporarily elude the posse and the wounded man led them to a small cabin. They were packing up to flee when they hear cries and find two babies. In conversation, the wounded man, addressed as Spike, extracts a promise from the other two, Steve and Ed, to look after the babies.

They beat it out the back door as the posse arrives and run amidst a hail of bullets as they’re chased. The gold laden horse heads down a different trail and they don’t have time to catch it. All they get away with are the babies and three cans of milk.

All that is characterized as happening many years before.

Then we see an older rancher, Jim McGowan, fifty-one, asking a man for permission to marry his daughter, twenty year old Mary. The man’s name is Steve Pelliser. Mary has no interest, instead liking the young deputy, Pink Lowry, and uses the young man to fend off a dance invitation from the older rancher. Later that night, walking in the dark, someone takes a shot at Pink and he returns fire at the gun flash, sixty feet away, improbably hitting his target. Which just happens to be Jim McGowan. The boy is found innocent because of self defense at the inquest, which doesn’t sit well with the dead man’s brother.

At the same time, young William Allan McGill(Wild Bill) learns something after his father, the town doctor, dies. In going through his dad’s papers, he finds a series of letters from someone addressed only as Ed, talking about turning the boy over to his parents as they could do a better job of raising him. Now he wants to find out who he really is and sets off to the town the letters came from, Willer Wells.

Raised in eastern schools, he’s somewhat of a tenderfoot. That’s where Hashknife and Sleepy come in, rescuing him from a couple of con men.

In short order, the banker, Edward Hanes, is killed and young Bill accused. A man in a hood breaks him out of jail just ahead of a lynch mob, the hooded man robs the bank, rustling is going on.

And it’s up to Hashknife to figure it all out. Sleepy helps of course, but Hashknife is the detective her. i can see James’ comparison to Columbo in the folksy manner he goes about asking his questions.

The copy I have is a British large print edition, having been part of the Tower Hamlets Public Library. The cover of the original edition is to the left.

For other forgotten books, check out PATTINASE.