and Hutch Bessey(Spencer). It was the last pairing before heir two Trinity films. This one was re-released as Trinity Rides Again to ride the coattails of those films. Woody Strode returns as Thomas the acrobatic gunman from another spaghetti western(don’t remember the title and can’t seem to find it). Lionel Stander plays the owner of a small circus and finally, Victor Buono(probably best known these days for his role as King Tut on the Afdam West Bat-Man series) plays Honey Fisher, a ruthless rich man who has a stranglehold on a valley where gold has been discovered. George Eastman wasn’t a star in these days. Real name Luigi Montefiori, he Americanized his name as was the fashion for Italian actors in those days. In the spaghettis, he played mostly heavies, though not here. He is deaf-mute Baby Doll. In the seventies, he became a star in Italian cinema writing and starring in a series of extremely violent horror films mostly directed by Joe D’Amato. As Baby Doll, he smiles a lot and plays the simpleton, though we get the idea from his actions that’s not really the truth.

When the film opens, we see the small circus owned by Mamy(Stander)

performing. Toy know the type everyone performs double duties. Stander is ringmaster/fortune teller, the three little people are the band/clowns. Strode and his son, Joe(Maurizzio Maurietti), are part of the trapeze act with a couple of other fellows. All serves as roustabouts to get the circus in order at each stop. The dancing girls are also hostesses who seat the customers.

Cat(Hill) is trying to sneak out of town, but gets his horse shot out from under him, and wounded in the process of fighting his way out. He steals a horse from the circus and bolts, only to bail out and hide while the horse is chased by the three gunmen(it’s night). He stows away in one of the circus wagons when it leaves town. The three wagons are accosted by the gunmen shortly where Thomas’s(Strode) son has already found Cat and he’s been attended to to stop the bleeding. When they open the third wagon, Cat and Thomas cut them down. 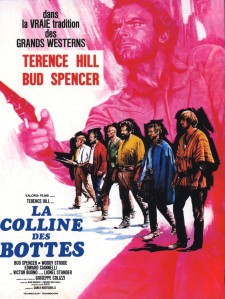 Honey Fisher has men terrorizing the miners or killing those outright that won’t go along with not renewing those licenses. Judge Boone(Eduardo Cianelli, billed as Edward Cianelli) is in town as county commissioner for the renewals. He’s carefully guarded so that he can’t wander around and talk to anyone, though he hears gunfire and screams in the night. He’s visited one night by one of the little people shinnying down the chimney of his hotel room with a message from Cat.

Spencer doesn’t make his first appearance until a third of the way into the movie. Hutch has retired from all that nonsense and spends his days fishing, aided by Baby Doll. He’s paid a visit by his wounded friend Cat, who reveals why he’s being hunted. An old friend of theirs owns one of the leases and needs help to get to the renewal. On Cat’s

advice, he was added to owner’s rolls, along with Hutch, the only way he could get his retired partner back into action.

Cat has brought along Thomas who found and nursed him back to health. Thomas has returned to the old gunman ways because one of Fisher’s gunman, who bears a striking resemblance to veteran actor/director L.Q. Jones, shot the trapeze rope during the act and Thomas’s son fell to his death. he wants the man responsible for it all. Not to mention the one who actually did the job.

The renewals become quite amusing as the rolls are read and Honey Fisher’s man says deceased. When asked about relatives, the commissioner hears

deceased. When asked if anyone has a claim, Fisher’s man presents a bill from each dead man on money owed the general store, which Fisher so generously took over when the owner decided to ‘leave’ town suddenly. Usually it;s only forty, fifty dollars owed. The one man still alive has ‘decided’ not to renew his lease.

The big finale is et in the midst of a performance of the circus, each member carefully schooled in what to do when the action starts. It spills out into the street and ends up with a brawl in the saloon(what self-respecting spaghetti western doesn’t have one).

As mentioned earlier, BOOT HILL was re-released as a third Trinity film. But this one was extremely violent with a lot of deaths(by the second Trinity film, out two heroes didn’t actually kill anyone).

I thought this one quite decent. Some I’ve seen were better, others not.