MY: 119: The Maltese Falcon – Dashiell Hammett

MY: 120: The Goliath Bone – Mickey Spillane with Max Allan Collins

Indiana Jones and The Kingdom of The Crystal Skull(2008)

If only this were true.

It would make a good movie or possibly a series.

It was a good week for my three teams.

The Skins beat their hated rival, the Dallas Cowboys in their final meeting in Texas Stadium. Jim Zorn, in beating the Cowboys in his first game at Texas, did something that hadn’t been done for many years. Final score. 26-24. Not bad for the fourth best team in the division.

Brett Favre had a first in his career: six touchdown passes in one game. The Jets beat the Cardinals 56-35.

I didn’t watch the Panthers game(off on a family outing), but they beat division rival Atlanta 24-15.

The rest of the league. Cincinnati, St. Louis, and Houston remain winless, and Denver loses to Kansas City, losers of twelve in a row going back into last season. Tennessee remains undefeated(4-0), as do the Bills(4-0) and the Giants(3-0) in a bye week.

update: The Bears made a goal line stand late in the game to defeat the Eagles 24-20.

update: The Steelers scored forteen points in fifteen seconds in the third quarter, then a field goal in overtime to win 23-20.

Quarry is Max Allan Collins’ hit man for hire in a series of novels started in 1976. These two are the latest and, I must say, as in all of his works, they are a quick read in a clean style. I’ve not read any of the others(five or six) and from what I can determine, they are generally not available. Abebooks seems to have only one listed.

Collins makes them easy to read without knowing anything about the others, giving a bit of back story as the narrative moves along.

This is the story of how Quarry got into the business.

Coming back from Viet Nam, he was recruited by a man known only as The Broker. He’d been a long distance shooter in the military and The Broker liked dealing with soldiers. Quarry was a code named laid on him by the boss, who was the buffer between his shooters and the clients.

All Quarry knew was his target was a college professor who liked boffing college girls. He was to kill him and find a manuscript, destroying it. That was all. Intel had already been done by another agent. His job was to watch a few days, nailing down movements, then do the job.

Then things started going wrong. People he had no knowledge of started showing up, he was caught unawares by a P.I. working the same client for a different employer, he became aware of The Broker’s client by accident, he gets involved with two women he shouldn’t.  A hell of a lot for a twenty-five year old on his first job.

Quarry has to start improvising, the bodies start piling up, none of them his target.

Being his first job, we know everything comes out in the end. But Collins does it all with style.

Quarry is forced out of retirement, his wife murdered in her bed, his resort and all monies, not to mention his identity, compromised. All this must have happened in the last novel. Here he’s the manager of a resort owned by an old army buddy. By a lake, he’d been on this job for six months.

Stopping in a market for supplies, he spots an old enemy from his former life. They had screwed a job up and Quarry had been brought in to clean it up. They beat the hell out of Quarry for making them look bad and now here was one of them, buying junk food and – tampons?

Quarry ends up rescuing a rich man’s daughter, killing the two mobsters doing it.He decides to take over and gets one hundred thousand for returning the daughter.

Then, when the rich man tracks him down, he’s forced to take a job to kill a young woman. When he falls for her, things really get complicated.

Both novels are part of the Hard Case Crime line. I liked them both, which is usually the case with Max Allan Collins.

This series was one James Reasoner recommended on Patti Abbott’s Forgotten Friday’s Books For Children.

It was one I was unfamiliar with myself and it would have been perfect for me at about age ten to twelve. I read every HARDY BOYS and TOM SWIFT I could find back then. I don’t know how these were missed, except that our libraries must not have had them. I looked for that kind of stuff back then and don’t know how I could have overlooked them if they were there.

They were known collectively as the RICK BRANT ELECTRONIC ADVENTURES and usually had some kind of electric gear worked into the story lines.

They were the adventures of Rick Brant and his best friend, Don “Scotty” Scott, both high school age. Rick is the son of a famous scientist and Scotty, a year older, is a three year veteran of WWII, lying his way into the marines at an early age.

They live on Spindrift Island, off New Jersey, with Brant’s family and other scientists at a facility where electrical experiments are performed. Rick even owns his Piper Cub that he flies back and forth to the mainland running errands for the scientists.

In the first book, they are planning a rocket lauch to hit the moon. In the second, an expedition to Tibet is to set up a radio to try and bounce a signal off the Moon, to be picked up by Spindrift Island. The boys get summer jobs at a plant up the coast in the third that uses an electrical process to extract valuable minerals, copper, magnesium,aluminum, gold, and silver.

These books were obviously designed for young boys as in each, there’s always someone out to sabotage things for their own reasons. The boys glom on to this obvious fact early on and the dense older folks never believe them. I mean, they’re just children. So it’s left to Rick and Scotty to save the day in the end.

I liked reading these three books, that twelve year old hidden inside escaping long enough to enjoy them. I wish I’d read them when I was younger. My reading tastes are a bit more sophistocated these days and I don’t have the will, or the desire, to track down the other twenty-one anymore.

It was a fun couple of days, though.

Another band of which I’ve grown quite fond .

Best duo I can remember. Thanks to Bill Crider for turning me on to them.

Mickey Spillane passed away in 2006, leaving orders to his wife that all unfinished manuscripts be “turned over to Max. He’ll know what to do with them.” The two had often discussed works in progress and Mickey had even trusted some manuscripts to Allan’s care. A good thing, Hurricane Hugo destroying Spillane’s home a few weeks later. 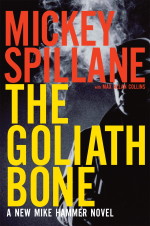 THE GOLIATH BONE is the first of several Mike Hammer novels that Allan is completing from rough drafts and extensive notes, not to mention those discussions about his intentions.

Hammer’s well honed nose for trouble knew something was up when he spotted the gypsy cab parked for a period, a mysterious hooded figure in back watching the streets. When a young couple comes along, descending into the subway, the hooded figure emerges from the cab to follow, with Hammer, .45 in hand, right behind them.

He interrupts an apparent assassination attempt, actually shooting the silenced .22 of the hooded man out of his hand. The force knocks the killer backwards down the stairs, dying of a broken neck.

The couple were the children of a married couple, professors at NYU. While on a jaunt in the Middle East, in the Valley of Elah, they find and dig up a thigh bone, human, so large that the original owner would have been ten feet tall. Could it belong to the biblical giant, Goliath, that David slew with a sling shot?

It was smuggled out and brought to America. But word was getting out. everyone was interested in “acquiring” it. The killer Hammer had stopped was linked to al-Qaeda. The israelis wanted it as a symbol of victory over an enemy. Private collectors wanted it. Every Arab nation was laying claim to the remains of one of their heroes.  A P.T. Barnum type wanted it. Homeland Security wanted it. The FBI came calling.

is it really the thigh bone of Goliath? That’s something that can never be proved. But them, religious symbolism has never really needed proof. Now everyone is afraid this will ignite a war in the Middle East or another attack on America.

What had Mike and Velda got themselves caught up in? They’d been planning that long put-off wedding that very weekend.

Now they were hired to guard the young couple. An old friend, fresh out of prison, was stabbed as he hit the street. Barely surviving, he warns Mike of talk amongst the Muslims of a contract on his head. Pat Chambers tells him of rumors of a 7’3″ al-qaeda assassin, known appropriately by the code name Goliath, slipping into the country through Canada.

All that and this is an older Mike Hammer. They are never specific about his age, though there are references sprinkled throughout about shuffleboard and social security. He’s still tough as nails though. When meeting a young special forces guy brought to the University lab for security, Mike thinks, “He’s trained to kill with one hand. With me, it would take two. When I was his age, he would be in trouble.”

Though he did a good job at Spillane’s style, it’s obviously a mix. Which is not a bad thing. I’m a fan of Collins’ books as well and it makes for a good blend.

I enjoyed the new direction. In the afterword, Collins mentioned that Spillane was working on a Hammer at the time of 9-11 and decided to have his PI tangle with terrorists in this one.

This is supposed to be the last Hammer chronologically, with at least two more “earlier” stories to follow. I look forward to them.

I first saw this video on Sandra Ruttan’s blog and fell in love with the song. When I investigated, I was disappointed to discover they had disbanded and retired in 2001.

A lot of weird goings-on this weekend.

The Patriots were positively destroyed by the Dolphins, 38-13 I believe. A 2-0 team taken down that bad by an 0-2 team. The last regular season game the Patriots lost was also to the Dolphins.

The Bills barely squeaked by the Raiders with a late field goal.

The Panthers started out great  at the beginning of the game, going up 10-0, then fell apart after that, losing 20-10.

The Redskins won, the Lions lost(I feel for Lions fans; they deserve better), the Cowboys knocked off the Packers on Lambeau field(the first time it had ever happened), The Saints lost, The Falcons won.

The usual suspects still haven’t won a game after three weeks: Lions, Bengals, Rams, Browns, the Chiefs, and the Texans.

Tonight’s game is the Jets against the Chargers. Though a Jets fan, I expect the Chargers to win. A Super Bowl pick by many in the preseason, at 0-2(they were robbed by a horrendous call last week) they can’t afford to lose a third game this early.