ONE AFTER ANOTHER has a plot built around double crosses. many of them.

Richard Harrison is Stan, the only name we ever have for him. He comes into town looking for Bill Ross, only to learn he as killed in a bank robbery.

The robbery is at the beginning of the film. Colonel Jefferson(José Bódalo) owns the bank. He’s accosted outside of town by a band of Mexicans led by Espartero(José Manuel Martín) who offers him a deal Jefferson can’t refuse. Espartero holds a paper proving the Colonel was a traitor during the war. They rob the bank, loaded with payrolls for area ranches and mines, to get money to save his peoples’ farms, Jefferson gets his money back from the insurance, plus the proof. Everybody’s happy.

The robbery comes off, but it’s a set-up. Nine men disguised as Mexicans hit it,

and when Stan Ross grabs a rifle and catches the robbers unawares, Jefferson offers to hold the weapon while Stan disarms them, only to shoot his clerk in the back. The robbers murder all the customers then. Jefferson had hired them to pretend to be Mexican, ponchos and big slouchy sombreros, and steal the gold. It’s hid in a cave until the furor dies down and the men discard their disguises and filter back into town.

At the bank, Espatero had his nephew working as a sweeper. Miguel(Hugo Blanco) recognizes the double cross and goes after Jefferson. He gets a knife in him, but Jefferson shoots him, a head wound that scrambles his brain.

The bespectacled Stan hires on to find Miguel, who’d escaped, for ten grand. At their camp, he makes a deal with Espartero, who denies any involvement. Stan was already suspicious.

Several more double crosses follow and Stan swears to hunt down and kill Jefferson and his nine co-cospirators.

One After the other.

He Starts the parade off with the undertaker(Eugenio Galadini, billed as Eugenio Galatini) bringing a coffin into the saloon and presenting it to his first target. Each succeeding takedown, he leaves enough for a coffin to be made.

A pretty decent little western with two more double crosses in the final few minutes. The director was Nick Nostro(billed as as Nick Howard) who also had a hand in the script, along with eight others. 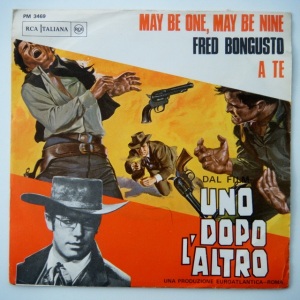