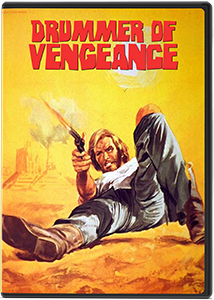 The title character is a small mechanical toy, the only thing our hero finds in the ruins of his home when he comes home from the war, a Union officer(Ty Hardin who we know only as the Stranger), finding the home burned to the ground. His wife and son had been murdered. A lot of the film is flashbacks, from The Stranger’s point of view as well as some of the villains.

The glaring plot hole is The Stranger says he knows all of the men who did this but the laeder. How did he know this? The ashes were cold. And if he knew the participants, how did he not know the leader.

The drummer toy is used to terrorize his targets, he winding it up, setting it 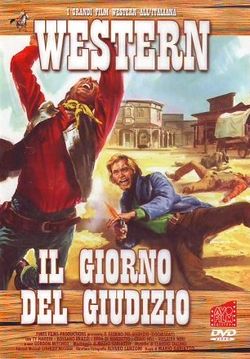 on the ground, and saying “When it stops, make your move!”

He uses a multitude of disguise. mostly a doomsayer predicting dire consequences as the men are shot down. Also, an undertaker.

This film has a checkered history. As was common back then, the English language release was heavily cut. The version I saw had most of those scenes restored, mostly add-ons to longer ones. You’d be watching and they would break into Italian for a few senrences. Especially noticeable in the wild west sequence. Spaghetti vet Craig Hill has a small role as O’Connor, the owner of the wild west show. During his spiel, he went back and forth from English and Italian. An Indian girl from the show, Rising 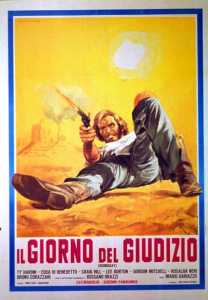 Two other vets had parts as well. Gordon Mitchell was the thinnest as a deputy and Rossano Brazzi was more prominent as the Sheriff.

The music score was mostly borrowed from The Hellbenders.

Not a great film. I have seen worse though.