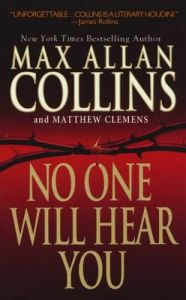 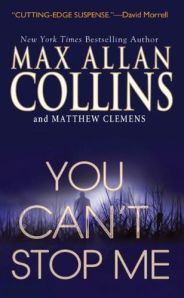 I’ve been a fan of the novels these two men have worked on together for years now. I’ve read all the CSI novels, the Criminal Minds and Dark Angel threesomes, and the Bones tale. I bought the first of these two, YOU CAN’T STOP ME, when it first came out, but it languished in the TBR pile until the second title came out and I decided I needed to get off the dime. Glad I did. These two were of that hard to put down variety with nice plotting and a writing style that seems to agree with me.

John Christian Harrow, J. C., is the host of a television series, Crime Seen, that showcases real criminals each week and has a tip line people who spot them can call in. He came about that job a few years after coming home one night, after a heroic act earlier in the day, to find his wife and fifteen year old son murdered. The killer was never found. The first book quickly sets that up, then moves into the meat of the story.

Crime Seen, a ratings smash, is nearing the end of it’s first season when one of his people turns up a similar crime to the killing of his family, a police official comes home to find his family murdered. The live finale of season one, J. C. goes off script to tell of a team he’s putting together, for a segment of the show called Killer TV, to track down the murderer of his family, forcing the network to accede to his plan. As the team explores every avenue, a disturbing picture emerges, the crimes similar in nature growing to large numbers.

We get sections with the killer, the self styled Messenger, as he makes his moves and it all heads toward a slam bang conclusion.

The second novel, NO ONE WILL HEAR YOU, finds J. C.’s team, J. C. as well, all thinking of returning to their other careers. This was, after all, supposed to be temporary. That gets derailed when a video arrives showing a murder of a young woman. Now, being Hollywood, these things can be faked, made to look real. But, after viewing the DVD, all are sure it’s real. The self-styled “Don Juan” is apparently auditioning for a slot on the “Killer TV” segment of Crime Seen and warns if they don’t show the video, he will double the rate of his “productions.”

At the same time, another killer is working, dubbed Billy Shears by the police for his propensity to cut off and take the male victim’s genitals as a -souvenir? he two seem to be competing for Crime Seen’s attention. J. C. has no intention of running the clips or sensationalizing these crimes. The police are hesitant to use his team and the FBI, when called in, blatantly forbid J.C. from interfering. Of course neither stops him.

Two fine novels from folks I’ve learned to trust. Worth a look.