This film was one of those that arose from the fear of atomic power and what it could do. Dr. Jeremiah Morley(Victor Killian) warns of the danger to civilization and has an audacious plan to save the world. along with a group of scientists, they work for a year planning, only to be rebuffed because of the cost.

The one that saves them is the son of their most savage critic, who’d used his newspaper empire to make Morley and associates look like fools.

Wright Thompson(Bruce Kellogg) believed it was his job to spend his father’s money. An adventurer who climbed mountains, dove deep into the sea, explored caves. To him, 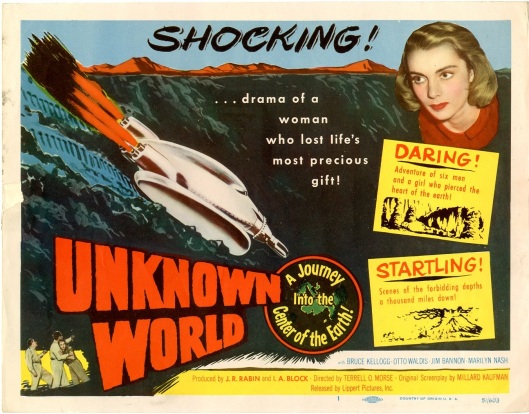 Morley’s plan was another excuse to have fun.

The old scientist believed there were habitable caverns deep in the Earth where humans could survive nuclear weapons. To that end he’d designed a machine, the cyclotram, that could bore into the Earth. All he needed was money to build it and fund an expedition. Wright Thompson did so and invited himself along.

Two old geezers, the rest all young, one a woman. Dr. Joan Lindsey(Marilyn

Nash) becomes the focal point of a romantic triangle with Wright thompson and Jim Bannon(Andy Ostergaard), the two alpha males flexing their machismo more than once.

Eventually they find a cavern with oceans, light in the form of phosphorus coating the ceiling of the cave. the perfect place for humanity to survive aomic desolation. Except the rabbits they’d brought along for tests deliver dead babies.

The science was a bit iffy. The baby rabbits were born sterile according to tests run by Dr. Lindsey. Now why that would make them born dead is not explaine.

Other sketchy science include the statement that the center of the Earth was not molten,

but cooler than the surface. But they kept running into steam and heat, active volcanoes, including setting off explosives within yards of steam leaking through from that active volcano next door to the extinct one where they began their trip. Not very bright scientist either. With sream everywhere, they seemed surprised when water condenses on the windows of the cyclotram.

Without any acknowledgment, this film shamelessly rips off both Jules Verne and Edgar Rice Burroughs.