Pjilip Wylie was an important writer of the mid-twentieth century and is largely forgotten today. Some of his novels covered things unheard of during those times. 1930’s Gladiator is considered an inspiration for Superman. 1932’s The Savage Gentleman was an influence on the development of Doc Savage. The Disappearance(1951) dealt with the double standards between men and women very early in the women’s rights struggle. His Crunch Adams, master of the charter boat Poseidon, stories(briefly a series with Forrest Tucker) apparently influenced the Travis McGee books. He was under house arrest for his 1945 novel, The Paradise Crater, which dealt with a 1965 attempt by Nazis to control the world with atomic power. His two novels with Edwin Balmer, When Worlds Collide(1933)(made into a 1951 film) and After Worlds Collide(1934) dealt with a doomed Earth and the efforts of a group of people to save a segment of humanity. 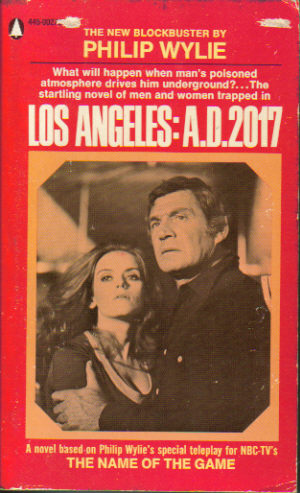 Which brings us to the book of this post, LOS ANGELES: A. D. 2017, a novel based on the ninety minute TV series THE NAME OF THE GAME, a revolving three star show set in the publishing world. Tony Francioso played a crusading reporter for People Magazine(before there was a real magazine with that name), Robert Stack was a former FBI agent, now editor of Crime Magazine, and Gene Barry played the publisher of an entire group of magazines.

This book, adapted from an episode that Wylie wrote himself, was considerably different from any other of the series and was directed by a very young Stephen Spielberg. I was reminded of this book when THE RAP SHEET did a post on Gene Barry’s ninetieth birthday.

This is more than just a typical tie-in novel based on a series. It deals with themes that are even more relevant today than they were in 1971. Wylie went beyond just novelizing his script. adding themes and ascribing thoughts to Glen Howard(Barry) that certainly wouldn’t have been accepted on TV at the time.

Glen Howard is returning from a secret meeting of industrialists, scientists, and military men. Ostensibly a meeting to discuss the effects of pollution and global warming on the environment, Howard had come to realize it was really just industry’s attempt to soft peddle the scientists and plan their opposition to the environmental movement.

He pulls over at a rest stop to record his observations and remembrances of their plans to send to the President(he had already secretly informed the man of the coming meeting). After recording for awhile, tired from the long drive, he falls asleep.

When he’s awakened by voices near the car, he finds himself in a nightmare. Two “bubbleheaded” men are looking in at him. Out the window, he sees rusted out cars sitting all around him and an inch of dust on the car.

He’s hustled into a climate controlled “police” van and returned to a dark, tunneled land. He goes through a brief torture session before someone realizes exactly who he is and stops it.

And that’s when the nightmare gets infinitely worse!

Apparently records show the area he was in suffered a three day sandstorm that evening in 1971, the rest stop buried, and no one had seen him since. The date is 2017. forty-six years since he’d gone missing.

The indoctrination begins as he’s shown recordings of all the various environmental disasters around the world that eventually caused the atmosphere to be poisoned. The majority of the world’s population had died and the rest lived in underground bunkers, six hundred cities of varying size(from a few thousand up to fifty thousand). Los Angeles is twelve K.

What’s worse, the country is known as USA, Inc., controlled by business, each city government being the board of directors. Pragmatic, they manage the population strictly. If a person gets old and is no longer productive, has a chronic disease, born with a birth defect, or just a “complainer,” they are “erased.”

Population growth is controlled by computers and doctors, people genetically matched to avoid possible birth defects. Otherwise, sex is wide open, with anybody and everybody from kindergarten age. It’s actually taught and encouraged. This would be some of those themes departing from the television episode, I don’t remember much about that show, it’s been so long since I saw it, but that definitely wouldn’t have been allowed on 1971 television.

Twentieth century Howard is disgusted by it all, but learns quickly that those ideas must be hid. “Erasure,” you know. His publishing empire had survived, though greatly diminished, and he’s expected to join the board and begin running it again. The people must be pacified.

Then Howard discovers there is an underground!

The novel departed considerably from the script. I think it was Wylie’s chance to voice some of his own concerns about the world. One suspects, corporations weren’t the villain on the televised version either(or at least soft-pedaled a bit). Sponsors and all, you know.

In rereading the novel for this post, I found one amusing coincidence, considering the previous administration and their policies toward environmental issues. At that first, secret meeting, one of the scientists defending the need to start reversing what we were doing to the environment, quite eloquently, was named Bush.

If one likes dystopian SF, this is worth tracking down just because it’s by Wylie.