I wonder about this one. 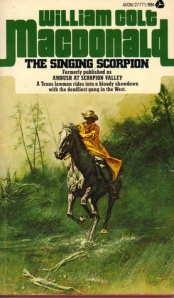 Allen William Colt MacDonald(1891-1968) was a prolific western writer born in Detroit, Michigan. His work was big in books and Hollywood. THE SINGING SCORPION(also published as AMBUSH AT SCORPION VALLEY) features his most famous creations, The Three Mesquiteers, characters also in 51 B-westerns from 1036 to 1943(eight of them starred john Wayne). This novel is copyrighted 1934 and in one place listed it as the first(though mention of a previous novel that had two of the characters), though other places say LAW OF THE 45s was the first. Not enough of an expert to know which is correct.

Tucson Smith is described as having a long, bony face, brick red hair, and slate gray eyes. He wears a pair of matched Colt .45s in twin gun belts. Lullaby Joslin is long and lanky, leather-like features, short(under six feet), with hair straight and black as an Indian’s. The third member is Stony Brooke, a man of dark complexion and blue eyes, a barrel chest, and a person of good nature and humor.

The Singing Scorpion is the villain of the story, a man named Gage Janisary(not 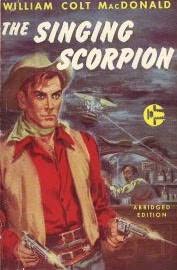 giving anything away here as all this is revealed before we ever see our trio of heroes. He gets his name from two sources. One is his habit of humming under his breath. The other we’ll get to shortly. Janisary has a gang based somewhere in Mexico and raids along both sides of the border.

Tucson Smith buys a gun in the small gun shop in Lobo Tanks simply because it’s a match to his pair of Colts down to the serial number on the butt, the next in sequence after his own pistols. The only difference is the initials P.E.L. on the butt. He’s immediately accosted by a man claiming the gun is his, huffy and almost as if he expected Tucson to hand it over on his word. All Tucson wanted was proof of identity. All the man wanted to do was try to take it from him, even to pulling a gun when he wouldn’t hand it over.

Next, later that evening, Tucson is visited by Gage Janisary in his hotel room with an offer to buy the gun at double what he paid for it. Again Tucson asked for proof of

ownership. Janisary pulled a gun then and demanded it. Either sell it or die. Of course Janisary didn’t know who he was dealing with. The Three Mesquiteers had laid a trap, anticipating such a move as the first man had been following him all day and not doing a good job of it. An abrupt change in manner, Janisary ask can he look at the gun. Under watchful observation, the trio allow him to look it over, take out the cylinder, and take apart each bullet, finding nothing but grains of powder. It’s suddenly the wrong gun and something is mumbled about a new formula for powder.

Annoyed and suspicious, Tucson takes the gun apart and finds a slip of paper in the butt. Directions to The Valley of The Singing Scorpion, a warning about a guarded tunnel, and signed Pete.

Since the boys have a love of mystery and action, that sets them on the trail. They soon find Pete’s full name, visit his family where the father was an old enemy of Janisary’s, and had recently been stabbed by the man, and begin following the trail. We get hundreds of years old cliff ruins and pyramids, tales of treasure, in an old valley. Prisoners to be rescued, friends to be saved, an old love of Tucson’s, and a satisfying conclusion.

For more forgotten books, as always, check out PATTINASE on Fridays.