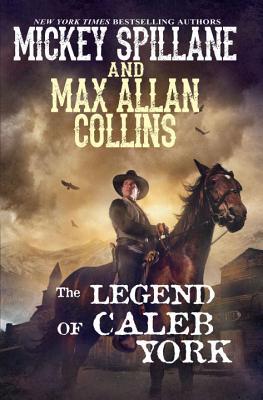 Mr. Collins has been completing, mostly Mike Hammer stuff. Significant chunks of prose with notes has been the norm. Here, we have an unfilmed movie script that Mr. Spillane wrote for his friend John Wayne.

So, a complete story by Mickey Spillane with Max Allan Collins putting his considerable skills into turning it into a novel. Never been fond of the term novelization.

A mysterious stranger rides into Trinidad, New Mexico and into a situation. A crooked sheriff, a gentle rancher, aged and blind, and his daughter. The town pretty much cowed by the sheriff and his deputies.

It would have made a good movie, exactly the sort of thing from that period. With Mickey Spillane’s touch of rough action in the mix. I can see Wayne in the role. Mr. Collins even invites the reader to picture the Duke, or any other western star, as you speed through the pages. I did, reading it in just a few hours.

I under stand it’s the first of several Caleb York novels. Not sure whether Spillane left some ideas in his notes or that Collins will be the idea man. Either way will be fine with me.