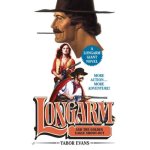 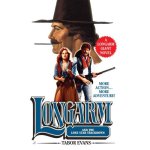 1: Longarm and The Golden Eagle Shoot-Out – Tabor Evans: Marshall Custis Long is chasing down Felix Gaunt, an outlaw that had shot a Federal employee. But then a contest looking for the fastest draw and best shot in the west lures both men. Longarm has to dispose of other entrants before he can get to Gaunt.

2: Longarm and The Lone Star Trackdown – Tabor Evans: Long heads into Indianola looking for a hard case he’s been pursuing. Two things distract him: old friend, the lusty, busty Jessica Starbuck and an armed French dandy who kidnaps her. A violent storm gets in his way as he tries to rescue the beautiful Jessica.

3: Longarm and The Railroad War – Tabor Evans: Longarm gets called away from a well earned rest when railroad baron Clayton Abernathy needs help in Wyoming. Masked bandits near the town of Rimfire are attacking the workers. there are suspects, the bother and sister owners of Rimfire’s stage line. But they’re being attacked by the masked bandits as well.

4: Savage Guns – William Johnstone with J. A. Johnstone: Sheriff Cotton Pickens has a problem. Young King Bragg has been tried, convicted, and sentenced to hang for the murder of three hands of the Bar T ranch. He’s been threatened by the boy’s father, Admiral Bragg, and propositioned by his sister, Queen Bragg, to look into the boy’s conviction, maintaining his innocence. Crayfish Ruble, boss of the Bar T, intends to make the hanging go off as scheduled, either legally or illegally. Against his will, Pickens comes to believe the boy innocent, but the judge who convicted him, wants evidence.

He has the hands of two ranches converging on town, armed to the teeth, to deal with as he tries to find proof.

5: Toyman – E. C. Tubb; the third Dumarest of Terra novel. Earl Dumarest comes to the planet of Toy, a world designed for the pleasure of it’s owners, in search of answers. The computer banks are the oldest in existence and he wants to consult the Great Library in hopes something of Earth is there. Maybe it’s location.

Unfortunately, he falls into the hands of a decadent young man absorbed in his own pleasures, pain inflicted on others.

6: Kraken – China Mieville: latest from the English author, a future London awash in magic and secrets where everyone is locked in a war to bring about-or prevent-the end of all things.

7: The Last Days of Krypton – Kevin J. Anderson: the author brings his talents to the DC universe, recreating the end of Superman’s home planet.

10: MYTH-Interpretations: The Worlds of Robert Asprin: a collection of short works from the late author, as well as his original prospectus that sold the Myth books to Starblaze, the publisher.

11: The Lone Wolf(free ebook from Project Gutenberg) – Louis Joseph Vance: the first of eight novels about Michael Lanyard, jewel thief with a soft spot for damsels in distress. The first of eight novels by Vance(a ninth by Carl W. Smith), he appeared in dozens of movies(about eight of then silents), a radio program, a TV series, and a female version appears in comics today.

I hadn’t really thought about Blackie Lawless and W.A.S.P. in years. I have several albums by them, all on vinyl, and no longer have a functioning player. Well let’s say, no functioning needle. I’m sure I could find one somewhere should I desire. But what’s the point these days.

Charles Gramlich had a heavy metal quiz recently on his blog and W.A.S.P. was one of the questions. And then last night Blackie appeared on THAT METAL SHOW running late on VH1-Classic. In his mid-fifties now, and no longer sporting the circular saw blade dangling from his crotch, he didn’t look a lot different than he did twenty-five years ago.

W.A.S.P. has a new CD out, BABYLON, and the video below is playing on Youtube. Sounds good and he still has a political-religious bent to his shows.