PROFESSIONALS FOR A MASSACRE(aka RED BLOOD, YELLOW COLD) stars George Hilton, George Martin, and Edd Byrnes as a trio of men on the trail of stolen gold. They are Confederate soldiers that were about to go in front of a firing squad for stealing arms and dynamite and selling them to Union forces for gold. Never mind that they blew up the wagon and the Union soldiers in the process.

George Hilton is Steel Downey, an ex-priest, defrocked because of his extremism. As in blowing uo a parishioner's home because he blasphemed in church. You see, he's also an expert in explosives. George Martin is Fidel Ramirez, a horse thief. Edd Byrnes earned the nickname Chattanooga Jim because he held up a bank in said town by himself.

The gold they are sent to recover was war booty, taken from a Union bank, and was to buy arms in Mexico for use in the war. The officer in charge, Major Lloyd(Gerard Heter) double-

crosses his General and steals the gold with a handful of like minded soldiers. They take off with a Gatling gun as well.

The four men take their time following. They traitors only had a half day’s lead and had a heavy wagon load of gold to slow them and limit the trails they could take. They do come to a point where four trails split off and each takes one(the ground is rock and leaves not much trail). Evidence is found on three of them that the wagon passed through. So naturally they take the fourth. It leads them to a small town where they find the Confederates had passed through. They get into a bar fight with a gang of Mexicans, finally dropping dynamite through a window as they flee.

Next they find a home where everyone has been massacred, men, women, and children. They find all the men’s clothes are gone and burned uniforms in the fireplace. The Major’s group are now dressed as civilians. They also pick up a young woman, Annie(Louisa Randall) who arrives to find her family slaughtered and believes them to be the murderers. They never show them telling her different, probably wouldn’t have believed them anyway, and they take her along.

She spoils an ambush set up when someone inconveniently leaves a knife near her. They’d taken a short-cut across the mountains. Ramirez knows the mountains and picks a trail their 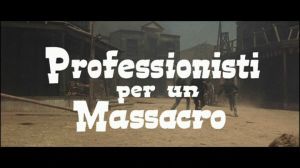 horses could follow, that a gold laden wagon couldn’t, and Downey lays in dynamite where they have to pass through a bottleneck. Annie runs screaming there’s an ambush, the wagon plunges on through before they dynamite goes off, but they do manage to separate the main band from the wagons and pin them down.

Annie sees then who really murdered her family when she recognizes her father’s clothes on a dead man and joins Logan in keeping them pinned while the three others swing around to intercept the wagon. Only to find the two men dead and the wagon gone. A third party has stepped in, a gang of Mexicans, a family lead by an old woman, and they are a virtual army. Ramirez knows them and where their home is located.

The two forces have to team up to get the gold from the bandits and we have a bit of hilarity with them fighting, quietly, in the store room while the Mexicans celebrate a couple of doors down.

Not a bad western and there’s one more surprise at the end. Well actually two more. I touched on one earlier in the post.

Here’s a trailer, in Italian, but will give you an idea of the picture.